HISTORY STILL IN THE MAKING 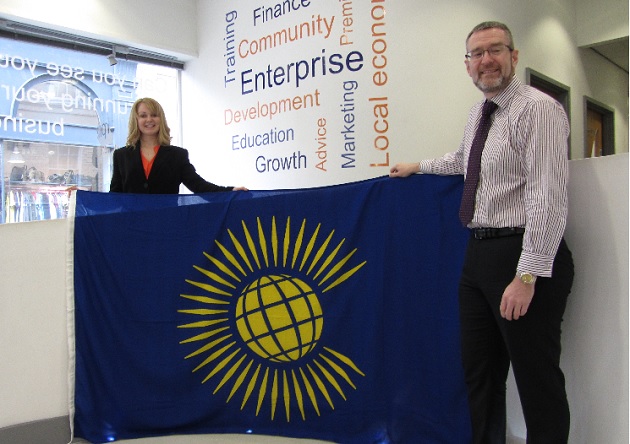 More than 730 Commonwealth Flags will raised throughout the United Kingdom, Channel Islands, the Isle of Man, the Commonwealth andUK Overseas Territories on Monday 9 March – Commonwealth Day 2015

Heads of State, Prime Ministers, Lord Mayors, Mayors, School Children, Girl Guides, Boy Scouts, Sea, Army and Air Cadets, Charities, Community Groups, Commonwealth Ex-Servicemen, a major Shipping Line, Town Councils, Local Authorities and others around the world will raise more than 730 Commonwealth flags together at 10.00hrs on Monday 9 March 2015 in one common celebration of this amazing family of Nations that encompass the Globe.

This unique initiative, in its second year, has once again caught the imagination of thousands of participants from all walks of life, joining with others across the Commonwealth in associating themselves with widespread public expression of commitment to the Commonwealth, appreciation of the values it stands for, and opportunities offered to its citizens around the world.

Halaevalu Mangisi Palu, Chief Commissioner (GGAKT) said: “In Tonga, where time begins, the Girl Guides Association of the Kingdom of Tonga (GGAKT) are proud and delighted to be the first in the world to raise their Commonwealth flag at 10.00hrs on 9th March 2015, leading the youth of the Commonwealth in this unique, historic, global event that morning, and we are indeed very happy and look forward to the day, and are determined with the youth of Tonga to enjoy our involvement in support of the Commonwealth Charter, to which we owe a great deal.”

For the ‘first time’ in maritime history, the Commonwealth flag will be raised onboard the 11 ships by the worlds leading Cruise Line/s – P&O & Cunard Line, as they travel the world that morning.

All the 22 Town Councils in Norfolk are taking part too, by raising their flags at various locations throughout the County through the generous, financial support from Nwes and Ex-Servicemen’s organisations in the capital cities of 21 Commonwealth countries will be raising the flag too at 10.00hrs that morning, led by The Royal Commonwealth Es-Services League in London, providing the event with involvement from all areas of the international community.

Scouts in New Zealand, Malaysia, Samoa, Jamaica, Belize, Mauritius, Sri Lanka, Bahamas, Grenada, Maldives, Trinidad & Tobago and Malta will be raising the Commonwealth flag at 10.00hrs that morning, joining others around the Commonwealth in this exciting initiative.

A Personal Message from His Excellency Kamalesh Sharma, Secretary-General of the Commonwealth, and a specially written Commonwealth Affirmation will be read out at each ceremony before the raising of the Commonwealth Flag at 10.00hrs, in a show of unity for this great family of Nations that encompass the globe.

Charity teams from Fields of Life, a Northern Ireland and Uganda based charity will mark the day by taking Commonwealth flags to the top of the UK’s four highest National Peaks, using the occasion to raise funds and profile for their worthy cause: Scafell Pike, England- Ben Nevis, Scotland – Mount Snowdon, Wales; and Slieve Donard, Northern Ireland, along with raising the flag in five schools, one in each of the five Regions across Uganda.

Commonwealth flags will be flown at many locations of special significance including six locations on the George Cross Island of Malta, Tristan Da Cunha, the remotest UK Territory in the world, St. David’s in Pembrokeshire: the westernmost city in Wales; Carlisle in Cumbria: the northernmost city in England; Lowestoft in Suffolk: the easternmost town in England; and Unst in the Shetland Islands, the most northerly inhabited island in Scotland, the Rothera Research Station on the Antarctic Peninsula, and at the Halley VI Research Station on the Brunt Ice Shelf, as well as King Edward Point and Bird Island in South Georgia, to name but a few.

Bruno Peek LVO OBE OPR – Pageant Master, ‘Fly a Flag for the Commonwealth’, said: “I am amazed how quickly this event is growing, we are only in it’s second year, and the involvement of so many from all walks of life is already started to encompass the globe and look forward to the next few years.”

His Excellency Kamalesh Sharma, Secretary-General of the Commonwealth said, “Fly a Flag for the Commonwealth is a most imaginative way for people in local communities – wherever they live, learn or work – to join together with others throughout the Commonwealth in a spirit of respect and understanding to celebrate the variety and unmatched diversity of our global family. I welcome and commend it.

“All our citizens, particularly the young, can express appreciation for the Commonwealth and the values for which it stands as set out in the Commonwealth Charter, and the rich opportunities it offers for mutual support towards more inclusive social and more equitable economic progress.”

Representatives from Nwes are honoured to be taking part in the ceremony in the parish of Thorpe St Andrew on Monday, when dignitaries from Thorpe St Andrew Town Council will be raising their flag for the Commonwealth.